Tuesday’s public meeting about the current proposal for the Logan Square public plaza was well attended by the standards of most neighborhood community meetings; it was, in fact, standing room only by a large margin.  I’m not sure how many attendees actually live in Logan Square.  I know there was a large presence of local food movement types, but I’m not certain they were necessarily loca-resideres, to coin an awkward phase (so awkward I find it necessary to explain it’s a riff on the word “locavore”).  I just don’t know. 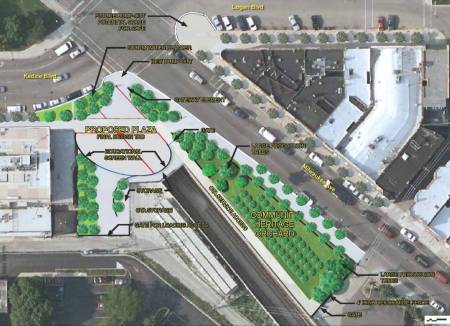 The meeting began with a tag team presentation of the current proposal that includes the orchard.  Nelson Chueng of the city’s Department of Zoning and Land Use Planning confirmed that, besides the original idea to host the farmers market on the site (now determined to not be feasible), the city has not yet looked at any other alternatives (also see Process below).

To state the obvious, the lot is oddly shaped.  It looks a bit like a bottle opener to me.

It fronts Logan Boulevard and as such it is part of the Logan Square Boulevards Landmark District and subject to review by the Commission on Chicago Landmarks. The north end of the site, once a bustling terminus to the CTA “el,” now sits over the entrance to the “el” subway tracks, thus making it difficult to construct a building there.  Though not impossible?  (Note this reference to the old station house remaining on this corner even after the extension of the subway).

John MacManus of Altamanu Inc., a consultant to the city, explained the current proposal (image above; click on image for larger view and ability to zoom in) that includes a public plaza on the north end of the site, which would be expanded by reclaiming the right hand “slip lane” on east bound Logan Boulevard, and an orchard on the south end, the more linear portion of the site.  The proposal is conceptual; nothing written in stone.

The plaza portion includes what they are calling a decorative educational screen/wall that would separate it from the orchard to the south and screen some storage also south of the wall.  North of the plaza, across the sidewalk,  some type of stormwater planter is envisioned (perhaps spurred on by what some are calling the Great Flood of 2010?), along with some type of element signifying a gateway to Logan Square.

The orchard portion is set back 12 feet from the CTA wall and would be surrounded by a 4 foot high fence.  Dave Snyder of Chicago Rarities Orchard Project (C.R.O.P.) explained that C.R.O.P.  is currently growing dwarf fruit trees that would grow to 6 feet to 14 feet in height, which it hopes to plant at this location.  The first significant tree harvest would be 2015.  Nelson Chueng of the city’s Department of Zoning and Land Use Planning also noted that there would be architectural lighting on the site.  C.R.O.P. plans to open the site to the public at a minumum on Sundays when the farmers market is open.

The city owns the site (at least most of it; there was a snafu with a small portion of the site that the city was working to obtain from the CTA and I’m not sure if title has been transferred), but if this proposal goes forward, it would deed the site to NeighborSpace.  NeighborSpace would hold the site in a land trust in perpetuity, as it desires to protect the site and others it owns from development.  It would reach a memorandum of understanding with C.R.O.P. to serve as the management entity of the site.

Some pros and cons that came out of the discussion  (exluding my own comments, which I’ll share later), most of which related to the orchard concept:

Con:  The proposal does not complete the square with a building facing Logan Boulevard.  As John MacManus stated, “To make a square, you have to enclose it; put buildings around it.”

Con:  John MacManus also talked about how a linear public space was difficult without a destination at each end, and the overall proposal does not provide that.

Con:  The proposal is all passive space, and C.R.O.P.’s mission to start community orchards in Chicago has nothing to do with the health of Milwaukee Avenue.

Pro:  C.R.O.P. plans to use the orchard for education and outreach, which will bring some people to the site.

Pro:  There are water lines that could be tapped into to serve the orchard.

Con:  It was not made clear who would be paying for the water hook up and use.

Con:  NeighborSpace prohibits fountains in spaces it owns, which prohibits any sort of water feature being part of the plaza.

Con:  The fence keeps the orchard area from being public open space.

Pro:  A suggestion that there be an accessible pedestrian path meandering through the orchard.

Pro:  Dave Snyder said they would be happy to remove the fence and have it open to all after some years.

Con:  NeighborSpace seems reluctant to eliminate the barrier to access based on experiences with other spaces they own.

Con:  Potential attraction of (even more) rats.  As one audience member asked:  “Will there be someone to pick up every piece of fallen fruit for the next 50 years?”

Con:  C.R.O.P. is a new organization without a track record and is all volunteer run.

Pro:  C.R.O.P. folks are passionate about their mission and have been working hard to address a myriad of issues.

Pro:  If C.R.O.P. fails and NeighborSpace could not find another management entity, the city would have first right of refusal.

Con:  NeighborSpace’s mission precludes it from allowing any type of future development, even if that’s what’s necessary for the neighborhood 10, 25, 50 years from now.

Con:  The process should allow community members to brainstorm ideas for the site (see more below), rather than just respond to one proposal.  And this meeting was not widely publicized.

The city should consider (and should have considered) alternatives for the site.  As I’ve done a little more digging into it, it looks like it’s not that C.R.O.P. thought a vital commercial corridor is where we need to put an orchard.  Rather, after turning C.R.O.P. down for several other sites, the city agreed to help it find a site, and this is what it came up with.

The city has apparently been considering this option since November 2009.  That would have been the appropriate time to come to the community for suggestions for alternatives in lieu of the farmers market.  It’s still not too late to do so, but I don’t think the city has any plans for it.

So by all means make any suggestions here and directly to Nelson Chueng with the city.  Any suggestions must be compelling as the city has already invested nine months and our tax dollars in paying a consultant to work with the plaza/orchard proposal presented August 17.

This entry was posted on Friday, August 20th, 2010 at 10:33 am and is filed under Logan Square, Milwaukee Ave.. You can follow any responses to this entry through the RSS 2.0 feed. You can leave a response, or trackback from your own site.