Improving on the (Woodard) plaza proposal

I attended the Public meeting March 8 regarding another public plaza proposal, this one at the triangle north of the Milwaukee-Kimball-Diversey intersection.  The meeting was reasonably well-attended, mostly by neighbors in the immediate vicinity, including representatives from the Crown Tap Room and the Hairpin Lofts and Logan Square Community Arts Center, two businesses that will be greatly impacted by whatever happens here.

With essentially the input of those two stakeholders and under the division of the Chicago Department of Transportation (CDOT) tasked with this project–the Streetscape and Sustainable Design Program–CDOT set forth the use case for the community:

Concerns expressed at the meeting included:

As I previously stated, I believe that the proposed Street vacation requires new street direction.  I believe changing the direction of traffic on just one of the streets to the north, Wisner Avenue, will do a world of good and allow the seamless elimination of the section of Woodard Street necessary to create this plaza.  With that issue addressed, I support the vacation and plaza, with some suggestions for improvement. 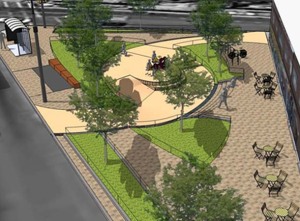 There were a couple of plaza options presented.

Option 2 (image right, looking southwest) creates a raised performance space in the center of a hardscape portion of the plaza with some steps and/or low seat walls for seating.  Surrounding this center area would be planting beds, runnels and swales to address storm water runoff.  Outdoor café seating for the Crown Tap Room would line the wall of the business to the north (bottom right of image above).  To address one of the community’s concerns, it’s important to note that the Crown Tap Room, once it starts serving food, could obtain a permit for sidewalk café seating with or without the Woodard Street vacation and plaza reconfiguration, although the plaza would certainly make the experience more enjoyable.

One version of Option 2 showed the part of the plaza shown in the lower left reserved for two parking places for car-share parking and/or an electric car charging station.  Really, either conceptual option could allow or eliminate the parking area, but this was not favored by a majority of those present at the meeting.  I’m an advocate for car-sharing, especially our local I-GO, but I am opposed to using part of this small plaza for any kind of car parking.

To provide room for cars over people is counter-productive to the idea of a plaza, and harmful to one so small.  A better idea would be to establish and reserve a couple of spaces on Kimball or Milwaukee Avenue north of the plaza for car-share parking or electric car charging while preserving the plaza space for people. 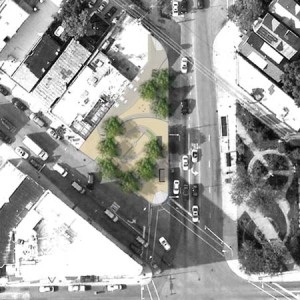 Both options would similarly integrate into the context of the site (image left) with café seating along the Crown Tap Room building on the north and sustainability features and a hardscape center plaza feature swirling out of a central performance area. 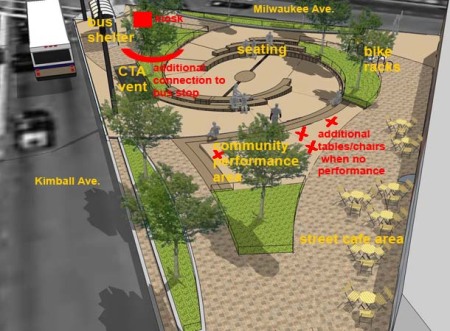 I am concerned about how this space becomes active.  It could be some time before the Crown Tap Room offers food to provide the need for and the activity of the outdoor café element.

Also, it was unclear to me what role the Logan Square Chamber of Arts, which is managing the arts center part of the Hairpin Lofts and Logan Square Community Arts Center, would play.  They seemed to suggest they would be doing some programming, but not undertaking any maintenance of the site.  On the former front, management of the Logan Square Community Arts Center is a brand new endeavor, and its primary focus will be on making the arts center itself sustainable.  I’m concerned the plaza will be a lesser priority.

The proposed plaza needs a regular activator, maybe something like a structure or designated space for a mobile kiosk at the south end of the plaza (top of the image above)–something that could be cheaply leased for a month or two at a time to keep the attraction fresh and keep drawing people to the plaza.

Call it a pop-up kiosk–like a pop-up store, but smaller, and ever-changing.  This might be a Mexican hot chocolate vendor January-February, a DJ booth in March, a flower stall in April-May, a DIY instruction booth in June, an helado vendor in July, an artist gallery August-September, home to a portrait artist in October, and a roasted chestnut vendor November-December.

The design puts up some barriers to how people would naturally move through the space, their “desired paths.”

Across the street in the park to the east, there used to be a lot of people using the park, if only briefly, while waiting for the bus.  One of the unintended consequences of putting partial fencing around Fireman’s Park was to keep most of those people out (of course, the intended consequence was to keep vagrants out).

While this proposed plaza thankfully does not include a fence, there needs to be an additional connection without barrier between the bus stop and the central plaza area.  This will invite those waiting for the bus into the plaza.  Otherwise bus riders will either not use the plaza or will trample the planting beds in a hurry to get on the bus that just arrived.

An additional connection directly opposite the connection near the bus stop wouldn’t hurt, allowing people to freely move diagonally across the plaza without trampling the planting beds.

I favor Option 1 because it allows for the possibility that a performance might take place from the seating area, in the dead center of the plaza, or on the performance area at the north end of the central plaza area.

When this north performance area is not programmed, however, the space could be filled with tables and chairs that match or complement whatever furniture the Crown Tap Room may use for its outdoor seating.  Tables and chairs would also offer seating options for people unable to use the steps and low seat wall the current design calls for.

They would also provide a different way for people to gather, to play cards or eat a bag lunch, for example.

Those are my suggestions toward improving the proposed design.  What are yours? 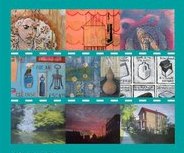 This entry was posted on Friday, May 6th, 2011 at 11:57 pm and is filed under Logan Square, Logan Square businesses, Milwaukee Ave.. You can follow any responses to this entry through the RSS 2.0 feed. You can leave a response, or trackback from your own site.

2 Responses to Improving on the (Woodard) plaza proposal