The softer side of Milwaukee Avenue

Upon reading The Dirt blog Interview with Jan Gehl, who is the author of Cities for People (on my “to read” list), I was prompted to write more about why big box stores don’t work in urban neighborhoods, about why blank walls kill the spirit of commercial corridors, or, rather, the opposite — about what does work.

What does work are soft edges, particularly on the ground floors, “where the communication between building inside and outside occurs.”

One of the reasons I think the stretch of Milwaukee Avenue between Logan Boulevard and Diversey Avenue (and its Kedzie Avenue opposing street wall) has such potential is because of the plethora of soft edges that still exist, along with some that have been created in recent years.

The newer additions are the various sidewalk cafés like Ciao Napoli Pizzeria’s (photo below left) that even makes its barrier interesting with an unexpected notch in its plane.  Then there’s old- (or never left-) school, like the sidewalk sales of Royal Discount Center (photo below right). 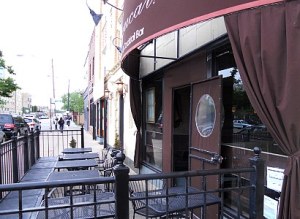 There are a multitude of ways to put forth a softer edge, and the variety is also important because too much of a good thing loses its value to communicate.  That’s why I like El Cid’s addition of a bench – what’s old is new again — by its sidewalk seating (photo above left).  Of course, it looks like it was put in place to address an issue of separation between barriers, but it serves as an ideal place to wait for friends before dinner at the restaurant.

A newer treatment is Azucar!’s literal soft edge (photo above right) in the form of curtains and what I’ll call a valance (rather than an awning).  Known as “soft goods” in the interior design business and normally an indoor window treatment, in this case the curtains and valance seem to bring the inside out.

The recessed and deeply recessed store entrances that still exist on Milwaukee Avenue (photos below) were once the norm on great shopping streets like State Street.  With good merchandising, stores slowly drew customers inside as they followed the windows around the corner, got carried away looking at the displays and possibly swept right into the front door and tempted into a purchase. 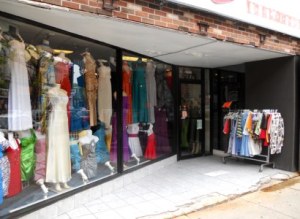 Unfortunately, many of the Milwaukee Avenue storefronts do not have good merchandising and therefore do not fully utilize this potential, which is one of the reasons I recently lauded Reform Objects for “already utilizing the increasingly rare deep retail display windows to good advantage.”

These recessed storefronts, the soft edges that make a commercial corridor conducive to lingering, are increasingly being sacrificed for interior square footage.  This may make sense for a restaurant that makes its money off seating more patrons.  It may even make sense for a discount store that operates on large quantities of product that don’t stand on their own to display and scrutiny.  But it doesn’t make sense for the corridor as a whole.  Too much of a good thing – in this case reclaiming interior square footage – could render a whole less than the sum of its parts.

Too much hard edge may be contributing to the many and long vacancies of the building on the east side of Milwaukee Avenue between Sawyer and Spaulding Avenues.  Across the street on the west side, storefront by storefront, soft edges are being replaced with the hard edge of uninterrupted glass façade as the building is “renewed.”  In its D’Noche expansion, Café con Leche replaced a recessed storefront with a flat glass façade.  Fortunately, the façade is a door wall that opens onto sidewalk seating during the summer, thus replacing an old type of soft edge with a new one (photo above) for part of the year.

Think of your favorite street for shopping or lingering:  What soft edges can you identify that enhance the communication between inside and outside the buildings and make you want to stick around?

N.b:  Join in the conversation and leave a comment for the chance to receive gifts from local businesses. 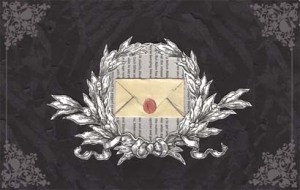 This entry was posted on Thursday, May 19th, 2011 at 6:04 pm and is filed under Logan Square, Logan Square businesses, Milwaukee Ave.. You can follow any responses to this entry through the RSS 2.0 feed. You can leave a response, or trackback from your own site.

2 Responses to The softer side of Milwaukee Avenue