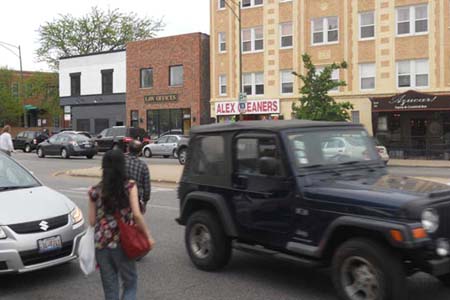 The photo above illustrates a typical daily evening scene as passengers exit the main north exit of the Logan Square “el” station to head east across Kedzie Avenue on foot.  In the morning pedestrians are crossing in the opposite direction.

Fortunately there’s a large median separating southbound and northbound Kedzie Avenue traffic, so after negotiating southbound traffic, pedestrians have a respite to plan their next traffic dodge on the other side of the median.  But this seems like a problem whose time has come to be solved.

The east side of Kedzie has filled out nicely over the years to create a restaurant row conveniently located to the “el,” bus depot, and public parking lot that combine for this excellent multi-modal transportation hub.  Bike racks have been installed inside and outside the station in recent years, and there are plans for bike lanes on Kedzie Avenue from Milwaukee Avenue north. Pedestrians, though, have not been accommodated well.  So what’s the solution?

Below I have drawn in a striped crosswalk that should be the minimum done to accommodate pedestrians at this location (I’ve also drawn in a representation of the planned bike lanes), but what else should be done?

Here are some things to keep in mind:

On the left of the photo above, as currently configured, there are three southbound lanes of traffic:  one for left turn only onto Milwaukee Avenue, one that proceeds through to the roundabout around the square, and one that offers the option of taking a slip lane right onto Milwaukee Avenue or proceeding through to the roundabout.  It’s my understanding that one of these lanes will be sacrificed for a bike lane.  Also note that there’s currently a bus stop on the street in front of the station.  Just beyond where the crosswalk is drawn in, there is a bus turnaround under nearly half the length of the blue canopy that could conceivably accommodate four buses side by side (though I’ve never seen more than one in recent years).  There is also a taxi stand adjacent to the sidewalk in front of the parking lot just south of the bus depot.  Beyond the taxi stand and before the far building shown, there is a cross street.

On the center median, there is a subway vent just south of where this photo begins (foreground), so I’m not sure what is below the rest of the median.  Just beyond where the crosswalk is drawn in, there is a gap in the raised median to allow buses to turn left out of the depot.

On the right of the photo above are two northbound lanes of traffic and a parking lane.  Again, it’s my understanding that one of the travel lanes will be sacrificed for a bike lane.  If the parking were to be sacrificed, it would be necessary to add parking elsewhere because of the provisions of the City of Chicago’s lease of its street parking to Chicago Parking Meters, LLC.  The buildings on the right include the restaurant row.  There is also an alley intersection just south of the southernmost building shown (foreground).

How do we accommodate pedestrians as fully as we have accommodated users of other modes of travel?  How do we do it in a way that’s attractive and enhances the amenities of a multi-modal transportation hub and a neighborhood restaurant row?  And what are some quick fixes? 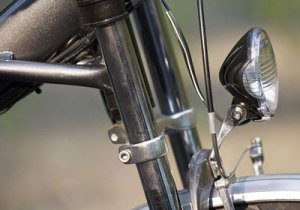 Bike light enforcement and distribution: Tuesday,
May 24, 7:00 – 10:00 p.m. at the
intersection of Milwaukee Avenue and Logan Boulevard.

This entry was posted on Monday, May 23rd, 2011 at 9:40 pm and is filed under Logan Square. You can follow any responses to this entry through the RSS 2.0 feed. You can leave a response, or trackback from your own site.