Bike/Walk Logan Square invites you to add your voice and critical eye to evaluating the Logan Square station. Join us May 28 or June 1. 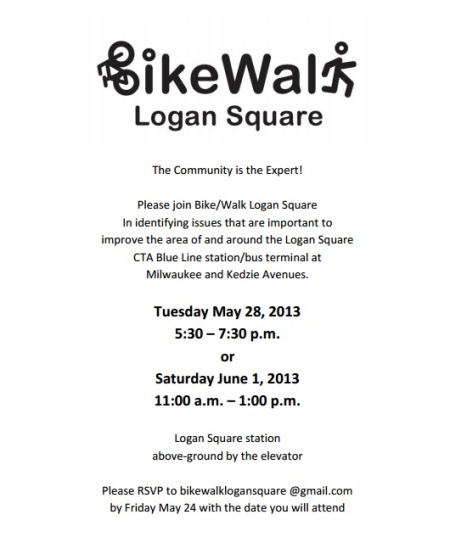 Plans for drive-through on Milwaukee Avenue

The alderman began the meeting touting the changes as supporting the corporate McDonald’s concept of hip and its desire to appeal to a new breed of customer, one who lingers in the restaurant and enjoys the Wi-Fi access.  I think these are customers who would embrace a pedestrian orientation and would gladly do without the drive-through.  The drive-through plans and flaunting of the “pedestrian street” designation (see Save Milwaukee Avenue’s pedestrian orientation) appear to conflict with the new McDonald’s concept.

The plan shows that the west/Milwaukee Avenue side of the building will stay where it is now, several feet from the property line.  (Unfortunately, McDonald’s Corporation’s representative has not returned repeated calls requesting a rendering of the plans to share here.)  The north and south sides of the building will also stay, while the east side will accommodate the expanded building, moving several feet to the east.

At the time of the community meeting, what should be the front face of the building with its bright yellow awning was oriented toward the drive-through rather than toward pedestrians on the street.  Instead, the Milwaukee Avenue face would be the typical side façade of McDonald’s redesign.

The former “pedestrian street” designation calls for buildings to be built to the sidewalk, not several feet back, but at the point of last month’s meeting, McDonald’s would not entertain bringing the building to the sidewalk.  The construction manager stated that they could not build to the sidewalk because of accessible requirements with the two exit doors to Milwaukee END_OF_DOCUMENT_TOKEN_TO_BE_REPLACED