History of the Morris B. Sachs building (Part I)

Late last year, I met Katy Gallagher, and learned of her passion for preservation.  I encouraged her to get involved with Logan Square Preservation (she did; at least she’s dipped her toe in) and asked if she would apply her passion and expertise to the benefit of Peopling Places readers (she has).   tagGallagher

Katy Gallagher has an M.S. in Historic Preservation from the School of the Art Institute of Chicago. She has worked as a photo researcher for historic documentary programs at the History Channel and WTTW Channel 11 Chicago. She has also worked as an archaeological conservator for the National Park Service, and as a curatorial intern for the Glessner House Museum. Katy has been a Logan Square resident for the past three years and enjoys researching structures both grand and modest in the neighborhood. 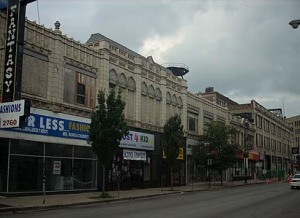 Designated a Landmark District in 2004 by the Commission on Chicago Landmarks, the Milwaukee-Diversey-Kimball district (photo right), developed in the 1920s, is a rare surviving historic commercial district in Chicago, especially impressive because four of its original six-corners streetscape remain intact.

The landmark designation identifies seven structures located between 2767 and 2808 N. Milwaukee Avenue as a “significant and visually distinctive group of 1920s commercial buildings.” (Chicago Department of Planning & Development. Landmark Designation Report Milwaukee-Diversey-Kimball District. Chicago, 2004, p. 3. )  These buildings contain abundant ornamentation made of terra cotta, brick and limestone and are terrific examples of the Classical Revival and Art Deco styles popular at the beginning of the 20th century.

Lynn Stevens of Peopling Places invited me to create a series of history profiles for each of the seven buildings contributing to the district, which may shed light on the area’s commercial and demographic evolution as it enters a new phase, and at the very least,
be of interest to Logan Square residents curious about this striking group of buildings.

As plans to redevelop the 2800-2808 N. Milwaukee Avenue property (known as the Morris B. Sachs flatiron building or more commonly as the Sachs/Payless building, image left*) into a community arts center and loft spaces have been secured, it’s clear that redevelopment is underway in the Milwaukee-Diversey-Kimball district.  So, we’ll start with a look at the soon to be Hairpin Lofts and Logan Square Community Arts Center.

At the beginning of the 19th century much of the Logan Square stretch of Milwaukee Avenue was prairie, and the corner of Milwaukee, Diversey and Kimball Avenues was the site of Callahan’s Ball Park.  (“Benjamin Wernikoff Obituary.” Chicago Tribune, 1983.)

In the 1920s opportunity for commercial development became available in Logan Square with the extension of streetcar lines along Diversey and Milwaukee Avenues.  (Chicago Department of Planning & Development. Landmark Designation Report Milwaukee-Diversey-Kimball District. Chicago, 2004, p. 1. )  Prior to the erection of the Morris B. Sachs building in 1930, the area encompassing the 2800-2808 property according to the 1928-29 city directory, hosted a diverse array of small commercial properties occupied by an equally diverse set of owners, including a confectionary owned by Theo Lolakos at 2800 N. Milwaukee Avenue; a shoe shining shop, owner identified as ‘Taylor’ at 2802; a cigar shop owned by Patsy DeMarco at 2804; 2806 sat vacant; and a barbershop owned by Felix Chiebowski at 2808.  (City of Chicago. Chicago City Directory. Chicago, 1928-1929.)  Across the street was a produce shop owned by Aaron Weiss, and a National Tea Company chain store.

In 1929 Sol H. Goldberg, president of the Hump Hair Pin Manufacturing Company of Chicago commissioned architects Liechenko & Esser to design a six-story mixed use combination store and office building at the northwest corner of Milwaukee and Diversey. This was the second building Goldberg owned and commissioned Leichenko and Esser to design in Logan Square, the first being the two-story commercial building (also one of the buildings contributing to the Milwaukee-Diversey-Kimball Landmark District) located at 2758-70 N. Milwaukee Avenue, which housed a number of chain store operations.

Leichenko & Esser was an architectural and engineering firm specializing in multi-family residential architecture in Chicago from 1921 until the early 1950s.  The firm has an impressive list of work designed in the Art Deco style, including several that were featured in R.W. Sexton’s Apartment Houses of Today (1925) as well as in the follow up edition, American Apartment Houses, Hotels, and Apartment Hotels of Today (1929):  the Tudor Manor Apartments at 7416 S. Phillips Avenue, built in 1925 (demolition date unknown), and the Yates Apartments at 7250 S. Yates Boulevard (date of construction and demolition unknown), both in the South Shore community; the Washington Pine Apartments, built from 1927-1928 and still standing at 5501 W. Washington Boulevard in the Austin community; and the Narragansett Apartments building, which is listed on the National Register of Historic Places, built from 1928-1930 and still standing at 1640 E. 50th Street in President Barack Obama’s neighborhood.  (Tracy Sculle. National Register of Historic Places Nomination: The Narragansett Apartments. Chicago, 2004, pp. 19-21.)

Conversation starter:   I have a preservation-related button to give away to encourage the conversation about about the Morris B. Sachs building and complementary topics, your reminiscences, stories you’ve heard, etc.   For each day through April 14, 2010 (CDT) that you add to the conversation (through multiple comments and responses to others’ comments) about these guest posts on the History of the Morris B. Sachs building (Part I) and (Part II), I will add your name to a list from which I will randomly select who will receive the button.  (Please be sure to use the same name and email with each comment; the email address must also be valid.)

I look forward to the conversation and know that Katy Gallagher does too. 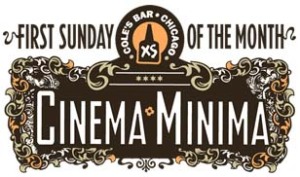 This entry was posted on Tuesday, March 30th, 2010 at 12:04 pm and is filed under Logan Square, Milwaukee Ave.. You can follow any responses to this entry through the RSS 2.0 feed. You can leave a response, or trackback from your own site.

13 Responses to History of the Morris B. Sachs building (Part I)