On Thursday, August 25, the BikeWalk Logan Square committee, of which I’m a part, presented its ideas for improving the main Logan Square “el” station and enhancing how the station accommodates pedestrians, cyclists and transit riders.  This post explains some similar and some different ideas as those discussed at Improving multi-modal access and experience at the Logan Square transportation hub.

Starting with the bottom of the concept image below (click on image to enlarge; north is to the right), this scenario also envisions a planted median on Kedzie Avenue and new mid-block crosswalks that connect the east sidewalk on Kedzie Avenue with the transportation hub. 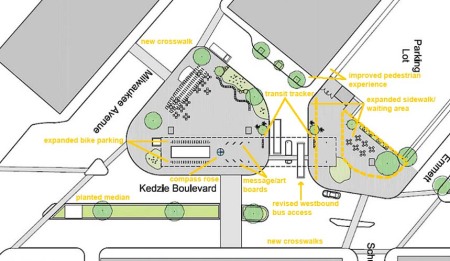 An alternative treatment for the main wide crosswalk might be a funky crosswalk painting advertising a local business (to help pay for additional desired improvements) or created by local artists (see for example, photo left of a Lang and Baumann art installation).  Or maybe it’s a map of the blue line.  (FYI, this is one idea I shared as part of the Chicago Department of Transportation’s current pedestrian planning.  It’s not too late to share your own ideas for the Chicago Pedestrian Plan.)

The idea is to have something bold that again catches the eyes of drivers to alert them that something different is going on here, that they should check their driving behavior.

Like the previous plan shown in Improving multi-modal access and experience at the Logan Square transportation hub, we also desire to improve the pedestrian experience on the sidewalk between the building north of the station and the bus turnaround lanes (top of concept image above).  This plan shows an expanded sidewalk area with parkway trees.

Another area of the transportation hub that could use some attention is the transition from the Emmett Street parking lot to the north and the station itself.  For those transferring from car to train or bus, access is currently through the connecting alley.  It’s an unpleasant experience, especially in the winter.  But it can be improved.

We’ve included the same level and placement of increased bike parking in this concept.  While not included under this scenario, a bike share station could instead be placed at the south station entrance across Milwaukee Avenue.

This plan suggests what may be the most drastic change from the CTA’s standpoint:  changing how the westbound 76/Diversey bus enters and exits the station.  Currently the westbound bus turns south on Kedzie Avenue at Diversey Avenue, drops off (but does not pick up) passengers

just east of the stairs/ escalator to the train station, turns north on Milwaukee Avenue and then into the transportation hub to pick up passengers, exiting to go back north on Kedzie Avenue before turning left to continue west on Diversey Avenue (see red on map image left).  The CTA, however, shows the westbound bus following the same route as the eastbound bus (see black on map image left).  We’re then exploring having the westbound bus follow the same (reverse) route as the eastbound bus.  This would eliminate the redundant Kedzie Avenue stop to drop off train passengers without inconveniencing passengers by requiring them to have to possibly wait at the light where the bus turns onto Milwaukee Avenue.  It would therefore remove one more point of conflict between pedestrians and vehicle traffic on Kedzie Avenue.

This would put passengers waiting for the westbound bus on the north side of the bus lanes.  In order to accommodate the waiting passengers, 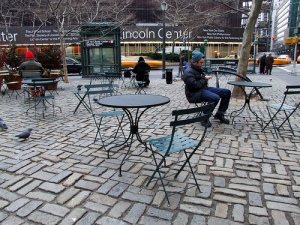 we propose to widen the sidewalk area by narrowing the bus lane here similar to that suggested for the plaza/park area expansion in Park concept for Logan Square “el” station.  We also want to capture unusable dead space of the Emmett Street parking lot to expand this waiting area.

And then to add café tables and chairs (see, for example, photo above of park tables) for people while they wait for the bus and perhaps enjoy a coffee and bagel from a food vendor.

Pedestrians and waiting bus passengers alike could also benefit from having train and bus trackers available (see, for example, photo below by M.V. Jantzen on Flickr).  The CTA has installed a train tracker screen in the train station below, but we suggest adding two above ground above each of the bus waiting areas that include both train information and bus 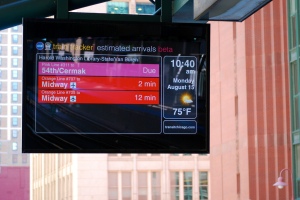 information for the 76/Diversey and 56/Milwaukee buses.  People enjoying a newly invigorated public place can then keep track of how long they have to enjoy it before heading to their next destination by train or bus.

We’ve again included the compass rose to help orient train riders.  And in this version we are suggesting a different type of wind barrier than the evergreen trees of the Park concept for Logan Square “el” station:  message/art boards.  They could be similar to the side panel of a bus stop.  Or lower in height to also serve as a leaning post while waiting for the bus. Or more stylized with something unique to the station, neighborhood, or future Milwaukee Avenue streetscaping.  They could provide a message center for neighborhood events, information about the plaza/park, the CTA, the neighborhood.  Perhaps a flip side could include

advertising to help pay for some station improvements. Or they might read together as an occassional art installation (see, for example, photo right of New Orleans art shelter). We’ve positioned them to provide a barrier to prevailing winds, protecting passengers waiting for the bus.

This entry was posted on Thursday, September 8th, 2011 at 6:09 am and is filed under Logan Square, Milwaukee Ave.. You can follow any responses to this entry through the RSS 2.0 feed. You can leave a response, or trackback from your own site.